Milkshake. Vegan Milkshake. Yummy Vegan Milkshake. It is possible to make a delicious milkshake without ice cream or milk. Make no mistake that a vegan milkshake is a health drink. It should still be considered a treat. But it is a treat you can enjoy and know you are not consuming any animal product.

The beauty of vegan milkshake is that anyone can drink it. By anyone, I mean everyone! Those who are lactose intolerant, old people, young people and vegans can finally enjoy a delicious milkshake without any cruelty. Whether you like chocolate, strawberry, vanilla or even Oreo, you can make a vegan version that taste amazing.

You won’t find many stores or restaurants that serve vegan milkshakes so you will have to make your own. But with these easy recipes it’s not a problem. 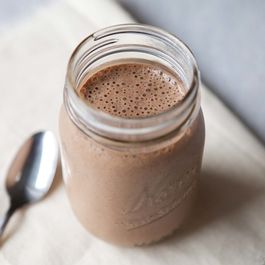 Almost everyone loves the standard chocolate shake. This vegan adaptation is perfect! Try this vegan banana milkshake recipe from Laura Theodore on The Jazzy Vegetarian for a quick and easy drink. Get this vegan recipe at PBS Food.

This dairy-free milkshake recipe is prepared with vegan vanilla ice cream and soy milk, so it’s healthier than traditional milkshake recipes, and it’s so easy to whip up. Here’s a raw vegan strawberry and vanilla milkshake recipe that is as delicious as it is healthy! Apple season has finally arrived! And with it comes a bevy of apple-rich desserts. If you’re hankering for a slice of apple pie à la mode, but don’t do well with … Add my Chocolate Chip Cookie dough balls to this shake to make a fabulous Vegan Cookie Dough Blizzard ! Sweetened with Dates, No Banana. Watermelon Milkshakes are yum yum yum, especially on a hot sweltering summer day. I would be hard pressed to think of anything as equally both creamy and refreshing. This Nutella milkshake consists of only healthy ingredients, such as homemade vegan Nutella, frozen bananas and unsweetened almond milk.

A dairy-free shake that tastes like a snickers bar! This healthy, vegan snickers milkshake is made only with whole food, good for you ingredients. A creative and delicious way to combine banana and chocolate for an amazing vegan shake!